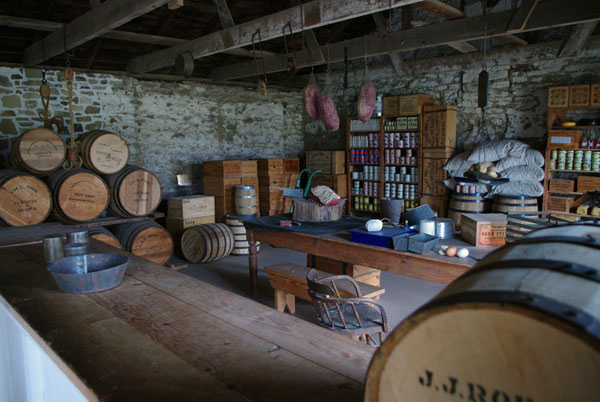 Imagine walking 50 miles across a hostile prairie just to make sure the mail goes through. That was among the regular duties for infantry soldiers at Fort Larned in the 1860’s. The fort was among those constructed to protect commerce on the Santa Fe Trail. The trail was one of the most important trade routes in the United States, but hostilities with American Indians in the region made for dangerous travel in southwestern Kansas. Soldiers provided armed escort for mail stages and wagon trains. They participated in several small scale conflicts with tribes in the area, and when the Indian wars were ended, the fort served as a point of distribution for goods and supplies promised in the peace treaties.[[endteaser]]

The current fort has nine original buildings, which is what makes it really special. Most of the forts of that time were disassembled, but Fort Larned still has nearly all of its buildings. It was made a National Historic Site in 1964 and is run by the National Park Service.

The buildings are all nicely renovated and set up as they would have been during the time it was an active fort. There is little signage or interpretation in the buildings. So, you feel very much like you are walking through a 1860s Army installation. The supply room, the officers’ quarters and hospital are all frozen in time as if they are just waiting for soldiers to return.

Our family enjoyed the live interpreters dressed in period clothing, who took time to explain the different rolls of the buildings, and what life would have been like at the fort. The “soldier” who greeted my sons in the enlisted barracks explained he was going to have to walk all the way to Fort Dodge to make sure the mail got delivered. He let them put on the heavy coat he was going to have to wear - even though it was a very hot day. The “blacksmith” patiently showed us how he made links on a chain or other supplies needed at the fort. One of the “officer’s wives” invited us to play on an 1860s piano in her living room.

This was a fun family stop. It is very nicely done, and a lot of it is hands-on. You could spend an hour, or half a day depending on your level of interest. The fort also still basically sits in the middle of the prairie, giving a good picture of the kind of vast open spaces the Army was charged with protecting.

Fort Larned has special events larger numbers of reenactors on Memorial Day and Labor Day weekend in the summer. They also host October candlelight tours and a December Christmas celebration. For more information about visiting the fort go to www.nps.gov/fols.