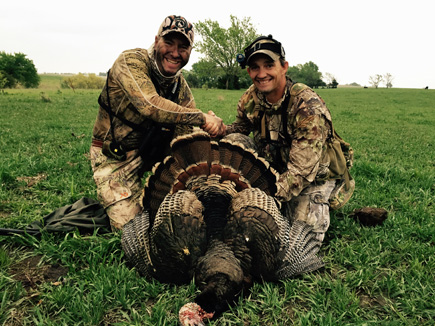 Sharing in the thrill of a hunter’s first turkey kill is exciting. And when that hunter is your spouse, it’s the making for a perfect Friday night date – especially in the spring, when Kansas offers great spring turkey hunting opportunities. Beautiful Rio Grande turkeys can be found in the western three-fourths of the state – an alluring draw for out-of-state travelers like my husband, Troy, our friend, Jeff, and me.

Driving to Kansas is feasible for a weekend hunt for us since we live only one state away. Last year, we took several weekend road trips to hunt Rios in eastern Kansas. Our friend Jeff filled his tags, and I took my first Rio – a 25 lb. turkey with an 11½-inch beard and 1¼-inch spurs. I may very well spend the rest of my hunting career trying to top it! It’s a memory that I’ll always cherish. Thank you, sweet Kansas!

Troy didn’t fill his tag in our first year of hunting turkeys in Kansas, but he was excited about my success and feigned ambivalence about going home empty-handed. Convincing us he wasn’t really disappointed was easy – because Troy’s an elk hunter to the core. Almost every elk season, he kills an elk. He knows and understands how elk think, can talk like them and, by the end of season, even smells a little bit like one. When turkey season rolls around each spring, Troy mildly complains when Jeff and I chat incessantly about how excited we are to hear the first gobble. It’s common to hear Troy say, “An elk feeds me all year, and that bird is good for one meal – maybe two.” Or “All of that work for one or two birds.” And there’s even “I don’t understand what all the fuss is about over a bird!”

Each time Troy says these things, Jeff and I try to convince him that turkey hunting is like elk hunting. Turkeys are vocal, allowing you to call and locate them – and sometimes even spot and stalk them – if you’re very sneaky and have luck on your side. At this point, we usually see Troy’s eyeballs roll clear back to Colorado’s Western skies. Jeff and I just smile at each other and whisper, “Wait until he shoots his first bird. He’ll be hooked!”

And that became our mission this year – to “hook” Troy on turkey hunting. We loaded up our car like a turkey hunting toy-chest. If we opened the door wrong, decoys, camouflage, bows, arrows, shot guns and more would spill out. As the horizon swallowed up the Colorado mountain silhouette behind us, we pressed forward toward beautiful Kansas. Turkey discussions filled the hours as we ticked off the highway miles, and it was easy to agree – Troy gets the first shot this year!

Late Friday morning, we arrived at Jeff’s family’s ranch. We’re fortunate to have access to private land for our turkey hunt. (It’s a rare treat, since we’re used to hunting public land at home in Colorado.) After a quick scouting trip, we quickly realized the turkeys were hanging out on the opposite side of the ranch – a different pattern from last year. Bountiful spring showers had changed the vegetation. The section to the west of the ranch house now offered the best strutting ground, but that also meant we had less cover, making setup a little trickier. 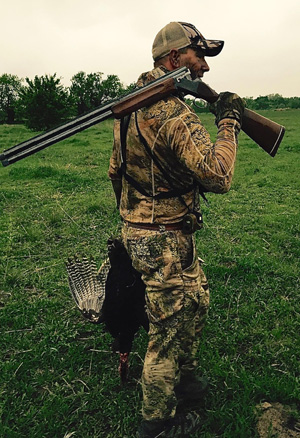 Parallel narrow tree lines separated three open fields. The turkeys were congregating on the northern section. We snaked our way carefully along the south end, hopscotching between trees. Jeff was in the lead, Troy and I following behind, each holding the shirt of the person in front of them. With a heads-up decoy at the ready in case we needed to quickly stop and present some type of cover, we navigated closer to the middle tree line. A soft rain began to fall, enriching the smell of the pasture around us, and we dodged cow pies and mud puddles.

Finally, reaching the largest tree in the middle tree line, we waited behind it until the last turkey head on the opposite side of the field ducked down out of sight. As Troy and I moved around the trunk of the tree to set up, Jeff swiftly moved out into the pasture and set out a few Avian X decoys – a Jake and a hen. Let the games begin!

In turkey hunting, it’s extremely important to keep your movement to a minimum. We knew that at any moment we could get “busted.” Now that Troy and I were concealed against the base of the tree, sitting side by side, we slowly moved our shotguns into position. Jeff and Troy began a sweet turkey cadence of calls that immediately attracted the attention of the turkeys in the next field. It was only a matter of minutes before I saw a head pop up in the tree line across the field. Cows to the right started mooing, and I began to worry that their curiosity would lead them to interfere with our turkey ambush. Luckily, they went back to grazing and fertilizing the pasture, staying a safe distance from what was about to happen.

As I looked back over to where the first turkey head appeared, there were now two red heads staring right at our decoys. As loudly as I dared, I whispered, “TWO birds incoming!” Jeff let out a perfect calling sequence, and the Jakes started running full-speed across the field toward our decoys. Then, as if on cue, they both put on the brakes and stopped. One bird looked at the other one, and they took off running again as if a gun went off to begin their race. Those two turkeys were cutting up the pasture, trying to outrun each other like track stars. I could hardly believe it!

Troy whispered, “I’ve got the one on the left. You take the one on the right. Wait until they get to about 30 yards and we’ll count down.” We were about to end this turkey race! As they slowed down just beyond our decoys, I heard the countdown and waited for Troy’s gun to go off first. Boom! … Boom! Troy shot his dead in its tracks, and I ended up shooting a little high, leaving the turkey on the right confused and headed straight back to where he came from. At that point, I didn’t care. Troy had killed his first turkey, and the thrill of the hunt was written all over his face.

A few sprinkles filtered down through rays of sunshine as Troy lifted up his bird and hoisted his dad’s browning shotgun over his shoulder. A smile emerged that could only be interpreted one way. Kansas had delivered a Friday night date success, turkey-style – he was hooked!

Troy and Emily Anderson have been sharing their passion for the outdoors since they got married. To them, hunting is not only a way to provide healthy meals around the table, but also an opportunity to get outside, spend time together and deepen their relationship, one hunt at a time. Their hunting stories can be found at FromtheDraw.com.