The Osawatomie Experience: a historic day-trip

Osawatomie is a great little Kansas day-trip full of history from a time when the state was new and people were passionate about their political positions. The town was a pivotal spot during the Bleeding Kansas fight for freedom. It stakes claim to being the place Kansans were first called "Jayhawkers" and is where the Kansas Republican party was founded. BUT, it is perhaps best known for its relation to the famous abolitionist, John Brown.[[endteaser]]

John Brown's story alone makes Osawatomie an interesting place to visit. President Theodore Roosevelt thought as much back in 1910, when he dedicated the John Brown Memorial Park on the site of the largest battle of the Bleeding Kansas Era - The Battle of Osawatomie.

Brown's story is full of drama and ideology, but here you learn how Brown, who often has a reputation as a crazy man, was actually a pretty level headed guy. He just REALLY disliked slavery. The portrait of Brown painted by John Curry in the State Capitol building up in Topeka - where he looks like a man possessed out of his mind - evidently gives him a bad rap. At least, that's a version of the story you can examine for yourself in Osawatomie. 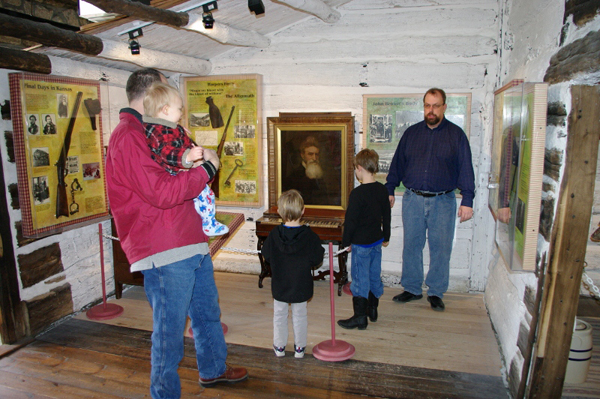 To learn about John Brown's Osawatomie experience, visit The John Brown Cabin State Historic Site in the middle of John Brown Memorial Park. The cabin was originally outside town, but relocated to this site because it was where Brown led the Battle of Osawatomie. In that fight, Brown led about 30 people defending the anti-slavery Osawatomie against an attack by 250 pro-slavery militia men led by John Reid. When you visit the park, look for a series of signs starting near the statue of John Brown that will allow you to walk through steps of this August 30, 1856 fight.

Inside a stone building at the park, you will find the cabin. Here, visitors can learn a little about Kansas frontier life and how the story of John Brown expanded into a national obsession as he took center stage in the fight against slavery.

You will also get to hear the story of the Florella and Samuel Adair, the half-sister and brother-in-law of John Brown who were instrumental in starting one of the first churches in Kansas. The Adairs were abolitionists, but did not believe in violent measures to end slavery. So, theirs is a story of taking in family (John Brown) even if you don't exactly agree with their ways.

A visit to this State Historic site calls for some extra time to plan a picnic at the park. You can enjoy the outdoor historical signage relating to the battle, but it also just a nice setting with good playground equipment for the kids.

After you visit the John Brown Museum and Park, there is a 10-stop driving tour of the town that places other historic features of Osawatomie in context. You can find a link to text that goes along with that tour here. There are also large signs around town on the tour and you can stop for more information in the summer time at the First Land Office at 6th and Lincoln. The driving tour takes you past the old stone church once pastored by Samuel Adair, the unique Asylum Bridge which once connected the community to the State Mental Hospital over the Marais des Cygnes River, and the Mills House constructed by the man responsible for the first successful commercial oil well west of the Mississippi. You can finish your visit with a trip to the Osawatomie History and Railroad museum (also on the driving tour). Here you can find out more about the Osawatomie State Hospital and the railroad, which had played a big role in the Post-John-Brown history of the town.