Once a punch line of toilet-themed jokes, the soccer team formerly known as the Kansas City Wiz (and later the Wizards) is now the ideal franchise in all of American sports.

Their matches are also the hottest ticket in Kansas City.

After 12 years of sharing the cavernous football stadium and three more years in a tiny baseball park, rebranded Sporting Kansas City opened its first true home in 2011. Since opening Sporting Park near the Kansas Speedway in Wyandotte County, the club has experienced a meteoric rise in popularity.[[endteaser]] 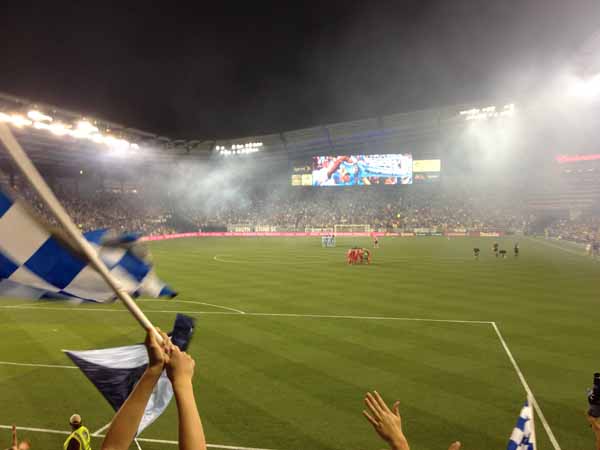 The change from a few thousand fans in Arrowhead Stadium to sellout crowds of up to 20,000 seems like an overnight transformation. In reality, it took a lot of planning by the team's ownership, and the focus of that plan was, and remains, the fan experience. As the organization rebranded to the moniker Sporting Kansas City, the team started calling its fans members - members of the club. Even casual fans who paid minimal attention to the then-Wizards suddenly felt like they belonged.

When I finally made it to a game at the new stadium halfway through the 2011 season, I was blown away by the facility. Nearly all of the seats are covered from the elements, and you actually get cellphone service, unlike many larger stadiums in the country. Everything was new and shiny. The boisterous and upbeat atmosphere created by fans singing and chanting for 90 minutes had me hooked. Now I attend home games every chance I get.

Late in the 2011 season, I was enjoying a postgame beer at the Member's Club, an in-stadium bar. A team executive walked up to a friend, bought him a beer and started a conversation. I thought that was pretty cool he took time out of his busy schedule to chat with a fan. That same exec raised the bar on opening night the following season. He started talking to my brother, me and our girlfriends at the conclusion of a Sporting win. He ended up buying us a round and asked if we had ever been on the field. Since we hadn't, he led us down to the field to point out the numerous amenities and the stunning Sporting KC locker room before heading home to his family. After thanking him for showing us around he said, "Of course. You guys are what make this place special. We built this stadium for the fans."

With that in mind, head out to a game as soon as you can. Even if you don't like soccer, it's worth checking out the stadium and its energetic atmosphere. You might even leave with a new appreciation for the game.

I haven't even mentioned the product on the field. Sporting KC has been one of the top teams in MLS since its move to Sporting Park, winning the 2012 US Open Cup. Winning has played a large part in the club's growth in popularity as the team has sold out its last 21 home games. You'll want to purchase your tickets before heading out to the stadium to join the club.