Riding the Rails: Taking a Heritage Train Ride in Abilene

The railroad is so closely tied to the Kansas story of adventure, opportunity and progress that it only seems fitting those visiting the state should take the time to ride the rails. Amtrak service is limited in our state, but excursion trains to provide a unique and relaxing opportunity to enjoy this piece of history.[[endteaser]]

Abilene is one of the original Kansas cow-towns. It was the end of the line for the railroad, where speculators could drive thousands of cattle up from Texas for shipping back to eastern markets. The era produced the seeds of legend that grew into what we now call the Wild West.

Of course, Abilene was also the home of another American legend, Dwight D. Eisenhower. The presidential library complex there includes an excellent museum, Ike's boyhood home and his final resting place. 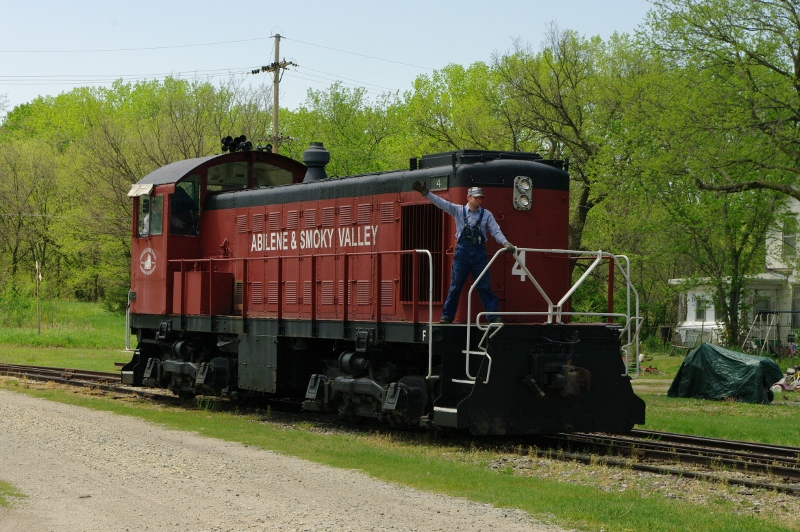 Just to the south of the Eisenhower Presidential Library and Museum you will find Old Abilene Town, which re-creates the cowtown days, and the historic Rock Island Depot - which doubles as the point of departure for the railroad.

Tickets are fairly inexpensive: $14 for adults and $7 for kids age 3 to 11. Children 2 and under are free. They have water available on the ride and you are welcome to bring your own food for a picnic - which I would recommend. In the summer, the train runs at 10 AM and 2 PM Wednesday thru Saturday and 2 PM on Sunday. There are some steam engine runs throughout the summer as well. Prices to go on one of those runs are a bit higher.

The excursion took about an hour and a half. The trip east to the town of Enterprise goes across a beautiful part of farmland and crosses the Smoky Hill River, which, thanks to spring rains, had a decent amount of water in it.

You can actually ride in the comfort of a dining car originally used to house the drovers (cowboys who rode the rails with the cattle to their final destination), or you can head outside to one of the open air cars and pretend you were one of the cows from the cattle drive - or just cool off.

At Enterprise, everyone was invited to step off the train and watch the railroaders move the engine from the front to the back of the train. The kids had a chance to talk to the engineers, sit in the locomotive and tour the caboose. Then we got back on and took the trip back. A narrator along the way pointed out spots of interest.

The kids really enjoyed the trip. Our excursion included several families with children of all ages out for a day-trip excursion. For us, it was a slow-paced fun way to enjoy a Sunday afternoon.

As an added bonus, the Wild West re-enactors at Old Abilene Town saved their last "gunfight" of the day for our return. Everyone who debarked the train and were invited onto the board-walk for the show, at no extra charge - except for the pass of the hat.

Other excursion trains in Kansas can be caught through the Midland Railway in Baldwin City  which includes The Kansas Belle Dinner train, or through the Heart of the Heartlands organization which does public event runs at several Kansas locations.