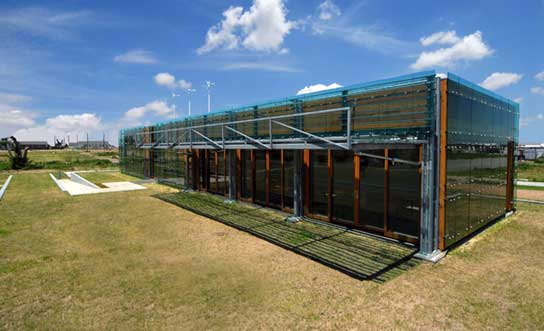 As the sun rose on May 5, it gave the city’s 1,400 residents a clear view of the havoc caused by an F-5 tornado. Despite the loss and devastation, the city persevered to rebuild—but rebuild a new and environmentally friendly city.[[endteaser]]

Soon after Greensburg was hit by the tornado, 250 miles to the northeast in Lawrence professor Dan Rockhill and 22 of the best and brightest graduate students at the University of Kansas School of Architecture, Design and Planning huddled to draw their own blueprint on how they might help with the rebirth of this not-so distant city.

The group is known as Studio804. Through the elective studio, classes have designed and built architecture projects in Lawrence and Kansas City. Despite the distance between them and Greensburg, it was no barrier for these young visionaries. “Designing and building a structure in Greensburg gave Studio 804 an opportunity to give back and provide an inspiration to the city,” Rockhill says.

When Greensburg’s City Council passed a resolution requiring all municipally owned buildings would strive to be LEED Platinum. Despite the fact that 5.4.7 Arts Center is a private non-profit, it too would be strive for LEED Platinum level of certification, which was music to the ears of the Studio 804.

The students would help create a cultural/arts center known as the 5.4.7 Arts Center, memorializing the destructive event that occurred on May 4, 2007.

First the students razed a building at the Sunflower Ammunition Plant in DeSoto, then using parts of it constructed seven units that fit together before traveling across the prairie to Greensburg. “I guess you could say we recycled the major parts of a building,” Rockhill says with a laugh.

The end result was no ordinary facility. Three 600-watt free-standing turbines and eight 175-watt solar panels sit on the building to provide more than enough energy to sustain the building’s needs. Rainwater that hits the roof, Rockhill says, is harvested for reuse on-site. The exterior glass is heavier than what’s normally used in a building and is capable of filtering ultraviolet rays.

On May 4, 2008, the first anniversary of the tornado, Greensburg opened the doors of the 5.4.7 Arts Center. Bob Dixson, Greensburg’s mayor, says the Center is living proof that culture is thriving in rural America. “Now, artists from throughout Kansas are traveling to Greensburg to display their artwork.” – Richard Shank

KANSAS! is a magazine published by Kansas Tourism, under the Kansas Department of Wildlife, Parks & Tourism. The publication promotes tourism in the state with an emphasis on travel articles. KANSAS! is published quarterly with spring, summer, fall and winter issues.