It was a Blast: Russell and Hays Sparkle with Fourth of July Spirit

The most recent stops on my Faces and Places tour itinerary were familiar names on my map. I've always associated Russell with its hometown hero, Bob Dole. My kids beg to stop by the Sternberg Museum of Natural History in Hays each time we pass by on Interstate 70. This visit, however, offered a unique opportunity to see each community at its festival finest.  I was to visit Russell's Fourth of July Freedom Fest, followed by a visit to Hays' four-day celebration, the Wild West Fest.[[endteaser]]

I arrived in Russell just in time to find the local VFW Post 6240 and settle in for the annual patriotic program. I was promptly introduced to one of the event organizers, Micky Johnson, who directed me to the community barbeque, served up by local veterans and men's auxiliary members.  After the program, I relaxed in the afternoon sun with a few of the veterans. I mentioned it seemed a bit contradictory to have veterans serving lunch on the Fourth of July. Shouldn't they be the ones getting lunch? "Well, this is real important," one man noted, having the entire community involved in this event. "We do this to teach patriotism." The others nodded in agreement. Actions like removing hats, offering respect to the flag and reciting the Pledge of Allegiance were things they wished to model for the younger generations.  The post was, in fact, packed with Russell citizens of all ages. After eating, they planned to play bingo, raffle a quilt, and hold a cake walk. Lest I became caught up in nostalgia, one veteran leaned toward me and said, "You can find more information on our website." 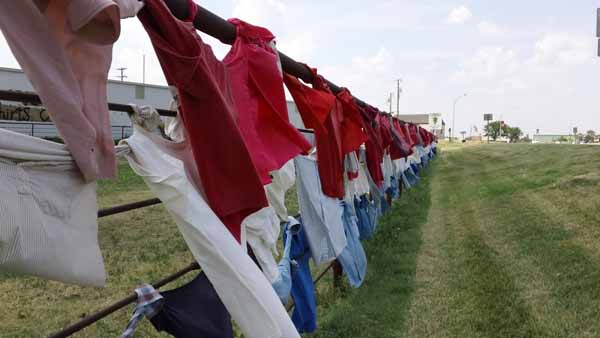 From the post, I headed to the fairgrounds for the evening concert featuring the Wes Cossman Band, Logan Mize and Gloriana. It was a perfect evening - the sky had that special pink golden glow that happens only during summer months and only in Kansas. On stage, Logan Mize (a Clearwater, KS, native) crooned about the "burnin' sun down on the plains," and the grain trucks along the highway. He could have been singing about Russell, or about my life. Either way, he can count me as a fan.

I left for Hays first thing the next morning. I recalled the early-morning stillness and beauty of Fort Larned from last summer's travels, and I was hoping to catch the Fort Hays Historic Site in a similar light. Like the other Kansas forts I've visited, Fort Hays invites the imagination to envision the men and women who made their lives on the harsh Kansas landscape. A row of beautifully restored officer's quarters contrasts with the open plain where other military officers (and oftentimes their families) pitched tents and suffered long winters.

My trip to this point included heart-touching displays of American pride, fantastic music, and compelling history lessons. What else could I pack into my two-day adventure?  I was about to meet with Mary Karst, Wild West event organizer, for an inspirational example of community partnership. Mary surprised me with her calm as she announced Hays expected 10,000 people to pack in the festival grounds to hear the night's lineup: country music star Neal McCoy, The Cleverlys and Sister Whiskey. She introduced me to some of the 45 event volunteers, each in charge of some special aspect of the production. Now in its 19th year, the festival's success relies on the generous support and cooperation of Hays corporate sponsors and community organizations. Mary explained that everyone from the Boy Scouts to the Cancer Council to the Kiwanis plays a role in pulling off this spectacular event. Proceeds are funneled directly back into the community, she added, pointing to two attractive permanent structures on the park grounds that were built with festival earnings.

I ended my day at the Ellis County Historical Society Museum where I met director Don Westfall and visiting historical figure Wild Bill Hickok (James Butler). The museum's artifacts tell the story of Ellis County's rich history, from the influences of the Volga Germans to the saloon antics of Wild Bill.

The communities of Russell and Hays simply shined with Fourth of July festivities this year. Next year marks the 20th anniversary of the Hays Wild West Festival, and, like I told Mary Karst, I'll be there --  and I'll book my hotel room well in advance.