Fried Chicken to Crow About at Wheatland Café, Hudson

The Wheatland Café in the little town of Hudson has a lot to crow about. Every Sunday, people flock to this small community in central Kansas to gobble up Darrell Bauer’s famous fried chicken on a buffet featuring favorite foods like Grandma used to make. Yep, that means flavorful chicken that is just-right crispy and golden on the outside while moist and juicy on the inside, savory ham, real mashed potatoes with white gravy, warm bread from the oven, and homemade ice cream. Darrell says he and his wife, Shannon, cook the hard way…from scratch. [[endteaser]] 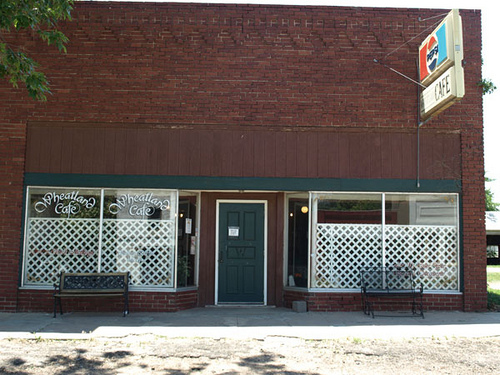 Most of the buffet items are family favorites, with a few recipes provided by friends. Shannon’s dad offered his versions of chicken gravy, creamed corn, and potato salad; I love his southern style green beans seasoned with brown sugar, onions and bacon. From the selection of several salads, I picked the cucumber I later learned was an old German recipe that came from a great-grandmother.

But it’s the fried chicken most customers crow about. There’s nothing hush-hush about Darrell’s recipe, you can find it in Wheatland Café, 21 Years of Secrets Revealed, a cookbook featuring all the foods from the café and catering business. Perhaps part of the reason his chicken is so finger-lickin’ good might be the Hudson Cream self-rising flour in which the pieces are rolled after being seasoned with salt and pepper. You probably have this quality baking flour in your cupboard; it’s milled right here in Hudson at the Stafford County Flour Mills, Co., just down the street from the café. This is one of the last independent flour mills in the country, and if you’d like a peek inside you can schedule a group tour any month except June, because of the wheat harvest.What restaurant serves your favorite fried chicken?