Enjoy a movie under the stars: Kansas Drive-Ins are Alive and Going Strong

With the arrival of spring in Kansas, the glow of a great tradition across the state rolls into our lives again: The Drive-In Movie. [[endteaser]]

There is nothing quite like the experience of watching the big screen under a big sky. When I lived in Wichita, one of my favorite weekend outings with friends was a trip to the Starlite Drive-In. Back then, we were all single and had the fortitude to stay up late for triple features. Part of the draw was the low "car load" price that could be had on special occasions. Even if you didn't like one of the movies, or had already seen it, the drive-in was a great deal. 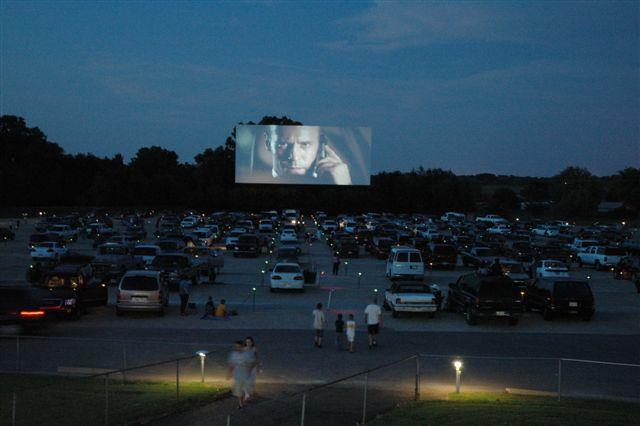 We would bring our lawn chairs, grab a snack or hamburger dinner from the concession stand and enjoy the movie-going experience in a unique way. We had a great time - having fun with the good company as much as whatever showed up on the big-screen. I have a vivid memory of one pair of friends sitting atop someone's SUV during the show, to get some distance from the group, during the early stages of their budding romance. They are now married with two kids. I'm not exactly saying you can thank the drive-in for that, but you just never know.

I have often be-moaned the fact that we moved away from Wichita's Starlite Drive-In to a town that lost its outdoor movie screen to "progress" many moons ago. That low "carload" price of just $12 in the early spring would be a wonderful way for our family of five could to actually get to the movies on a regular basis. No babysitter needed. Just watch the early show together, let the kids put on their jammies and lay down on their sleeping bags or air mattresses under the stars while drifting off sleep as the second or third feature gets started. Man, that's the life.

Luckily, the Starlite Drive-In and several others across the state have devoted fans who do just that -make it a family affair and keep the tradition alive. If you are looking for a Drive-In theater near you, here are some of the spots in Kansas you can go. Most open in March and April for the season:

If you don't have a regular drive-in near you, don't despair. You can still keep an eye out for the outdoor movie experience this season. A lot of communities have these kinds of events. In Topeka, we have been to them at several places including the Kansas History Museum, the Statehouse and Lake Shawnee. We even got a projector last year and showed ET:The Extra Terrestrial to the neighbors on a sheet hanging over our back deck. The kids absolutely loved it.

In Kansas, we are blessed with wide open skies. So, enjoy them. As you are making plans for activities with the family this warm-weather season, I recommend finding one where you can combine the natural beauty of the open sky on a nice night with the projected beauty of your favorite film.

It can turn a familiar activity into a family memory.