Cowboys old and new - and teachers too 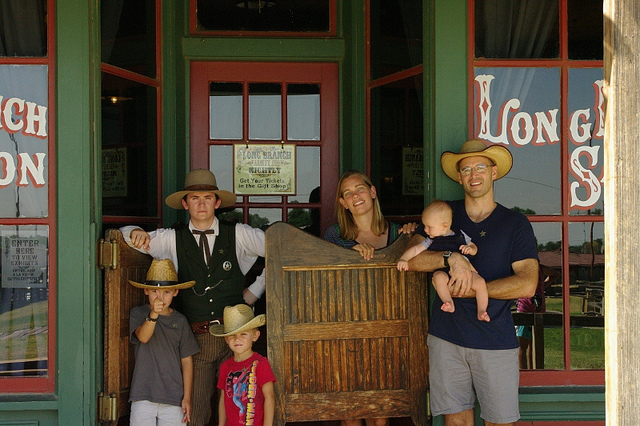 Dodge City Days is a 10-day event that lets your family enjoy cowboys from yesterday and experience the way they still play today. [[endteaser]]

Our family recently went down to see some rodeo roping - as a part of the ramp up to the annual five day PRCA rodeo that goes along with the Dodge City Days celebration. The roping we watched included local teams and world champions, showing off their skills.While we were there, we also enjoyed a burger feed that was part of the dozens of events included in the Dodge City Days party. The celebration has a little bit of something for everyone – and that’s not just a cliché. There are concerts, an art show, a carnival, lots of opportunities to eat and even a few gunfights – safely contained of course.

We also had to make a stop at Boot Hill Museum, which gives the kids a chance to intermingle with those “gunfighters” and “marshals” re-enacting the wild Cowtown days for which Dodge City is best known. My boys even got the chance to act like showgirls dancing in their boots and hats on the stage of the Long Branch Saloon before heading off to “jail.” Yes, good, wholesome family fun. :  )

As if all this hands-on experience with the Wild West isn’t enough of an education for your kids, while you are in Dodge City you should try what I think–truly–has to be one of the most unique museum combinations under one roof in the country.

The Kansas Teachers Hall of Fame was actually the first teachers hall of fame in the country, which in itself is cool. It’s a labor of love, run by volunteers and kept open in part by the funds that come in from the wax museum. Smart plan, but then again, what do you expect? Teachers thought of it.

We were treated to a very engaging tour of the teachers museum by a former second grade teacher, who–of course–knew exactly how to interest my nearly second grade son. The neatest thing here is that they have recently installed touch screen TVs in their main gallery that allows you to search through every teacher who has been inducted into the hall of fame. You can search for teachers by name, or from your hometown or school district. You can see all of the nomination documents and a summary of their career. It’s pretty high-tech cool.

They also have a room that features teaching tools through the years. As parents with school-age children it was fun to take a walk down memory lane with things like desks and mimeograph machines.Then, go upstairs to the wax museum. There you will see the requisite scenes of characters from yesterday–and a few of the grotesque as well. There is black light and some scary stuff, but you will learn a little bit of the history too. After all, it IS run by teachers.