Having just left the infamous Boot Hill Casino in Dodge City, our road trip took us to the southwestern corner of the state to Cimarron National Grasslands, one of 20 National Grasslands in the U.S.Knowing the route we wanted to take, the Grasslands seemed like a logical place to camp, despite not knowing much about them (or where to camp).[[endteaser]]

As we made our way from Dodge City the sun began to descend. We drove through small towns lining Highway 56 and found an appreciation for Kansas' agricultural heritage, clearly visible in this part of the state. We also saw more and more signs for Elkhart, the southwestern most community in Kansas, surrounded by the Cimarron National Grasslands. 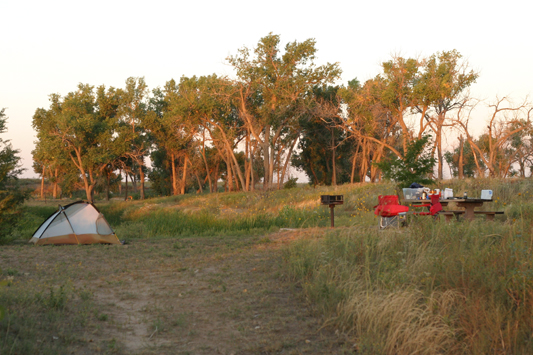 We entered the Grasslands on U.S. Highway 56. Not knowing what to expect, we began to fear that the Grasslands would in fact be more like farmland—making for an interesting camp story. As we turned north onto K-27 we saw the picturesque landscape and knew we had arrived. A short distance later and a couple turns onto a dirt road, we arrived at a beautifully designed campground and recreational area.Shaded by plenty of cottonwood trees and a blossoming landscape, the individual campgrounds loop around sunken marshes and a fishing pond where herons were nesting.

We paid our fee at the tin box and got busy setting up camp. We when arrived we were the only travelers (on Labor Day weekend nonetheless). We chose a campground that rested above the marsh and was close to the trailhead for the next day’s activities.After we set up camp we got the grill going and made dinner as the bullfrogs began to the croak. Eventually a small camper also arrived at this hidden and fairly new campground. The area continued to reveal its amenities (picnic areas, gazebos, restrooms and plenty of signage) making this possibly one of the most surprisingly enjoyable campsites we’d ever hit.

As the full moon rose, we basked beneath a sky studded with stars. Roughly 10-20 miles from any civilization, the view was uncompromised by any nearby city lights.

As we woke in the morning, still to the sound of the bullfrogs, we saw the moonset; it had been years since witnessing such a site. To the east, the sun began to rise, reflecting on the pond.

Camp coffee on and Yoder cinnamon rolls consumed, we decided to embark on a hike. The trail would lead us over the Old Santa Fe trail and up to a ridge. What was so surprising—and refreshing—about the landscape was its color. While drought and high temperatures had threatened the state elsewhere, this southern climate thrived with its unique vegetation. Our most bizarre find was the watermelon gourds that snaked their way along the trail.

Remnants in the sandy dirt trail exposed the animal footprints and markings of snakes, which is what makes the Cimarron National Grassland such an exclusive destination—it’s untouched. The wildlife hasn’t caught on—instead they still chirp, fly and flock around the area, giving visitors an up close and personal experience with a destination that is truly Kansas. Quick Facts:·  The Cimarron National Grassland contains 108,175 acres.

·  In Kansas, it is the largest area of public land and the only parcel managed by the Forest Service.