This is one trip that really rocks. I’ve long admired the limestone fence posts that give the Post Rock Scenic Byway its name, and I’ve come to realize this native rock is the foundation of art, culture and heritage in the area. So when I traveled this 18-mile route on K-232 between Wilson and Lucas, I focused my journey on the rocks. 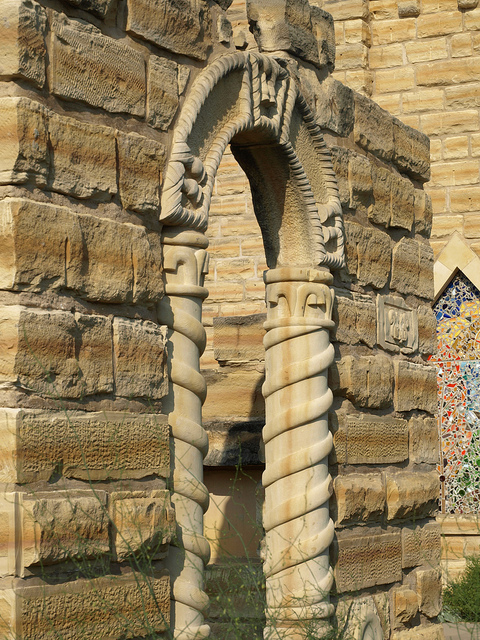 It’s amazing what we see if we just take the time. My husband came along, so we started our adventure leisurely walking through downtown Wilson, looking up at the vernacular architecture. Down an alley we discovered a round – yes, round – limestone structure built as, of all things, the city jail.

Other beautiful buildings include the United Methodist Church and the Midland Railroad Hotel and Restaurant which, by the way, is a terrific place to meet for dinner or spend the night.

Traveling north on the byway, we spotted more and more stately post rock fence posts lining the pastures. One of these posts, located three miles north of the Wilson Lake dam, is an extra-special piece of art. The face of a woman with long, flowing hair peers west, carved in the limestone by Fred Whitman of California.

Arriving in Lucas, we found the Grassroots Arts Center where I was most interested in the outdoors exhibit behind the building - the Post Rock Courtyard. It features architectural embellishments created in limestone by early-day stone masons. Then it was off to the famous Garden of Eden to see Samuel Perry Dinsmoor’s limestone house built differently than most. The stone was quarried in up to 20-foot lengths which were laid with dovetailed corners similar to a log cabin.

Sometimes, art also is right below our feet. Enjoying the Post Rock Country, we traveled eight miles north of Sylvan Grove where just off K-181 is an amazing 1908 double arched stone bridge that once supported the highway over Spillman Creek. Thank goodness someone had the foresight to save this amazing structure! A single arched stone bridge stands a half mile south and a half mile east.

To see how all this work in stone begins, we visited Vonada Stone Company located nearby. Duane Vonada explained where the limestone is located beneath the surface and how the early day settlers removed it for their use. He took us to the quarry, where I had the opportunity to drill holes in the rock the old-fashioned way. My husband placed feathers and wedges into the holes he then hammered to break the stone apart. You can do the same, just organize a big group of friends and schedule a tour with Duane.