A Kansas player in the Civil War


Fort Scott has a unique history that follows the growing pains of our country in the middle of the 1800s. The National Historic Site recently marked the 150th anniversary of the start of the Civil War, but the history of the Army’s presence in the area stretches back to a time when the western edge of Missouri marked the division between white and Indian settlements. [[endteaser]]

When Fort Scott opened in 1842, the Infantrymen and special horse soldiers, called Dragoons, were stationed there to keep the peace along what was expected to be a “permanent” frontier dividing white settlers from the Indian Territory. It was barely a decade later when the fort’s usefulness was deemed complete. The expansion of lands in the west after the Mexican-American War and white settlers moving in meant the front line of the frontier moved west.

Army forces were moved out in 1853 and the buildings of Fort Scott were sold at auction in 1855. Those buildings became the basis of the town of Fort Scott. Just a few years later, the soldiers were needed again as white settlers in the area feuded against each other. Counties around Fort Scott became a hotbed of guerilla activity during the Territorial Bleeding Kansas period. Kansans engaged in a bitter battle of neighbor against neighbor to enter the union. Former officer bunk houses and enlisted personnel quarters became privately owned hotels, one housing opposing pro-slavery and the other housing free-state forces. The Army came back to Fort Scott to protect the predominantly pro-slavery citizens of the town from the violent free-state sympathizers in the surrounding countryside. 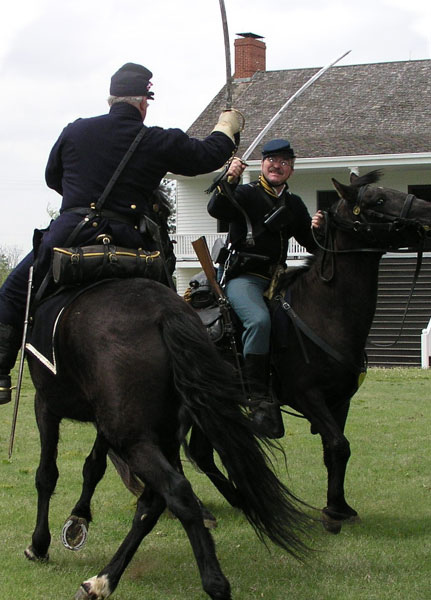 Kansas entered the union as a free-state in January of 1861. Barely three months later, President Lincoln issued an order for soldiers to put down the “rebellion” we now know as the Civil War. During the war, Fort Scott served as an important supply post. Army troops were again deployed to the area, and while there were no major battles at Fort Scott, Union soldiers played an important role in calming the guerilla warfare between Jayhawkers and Bushwackers along the border.

Army troops left Fort Scott again after the Civil War, but would return one more time in 1869.  This time they were called to protecting the changing face of westward expansion. Troops helped assure the construction of the railroads before finally leaving the fort in 1873.

Fort Scott has a really varied history, making it an interesting stop. It is an important site in the Freedom’s Frontier National Heritage Area, which recognizes the importance of the border clashes between Kansas and Missouri in the greater history of the Civil War in our country. The site has four original buildings and several reconstructed buildings that display the original 1840s fort experience.

There are several special events throughout the year featuring historic re-enactors and demonstrations. Holiday weekends in the summer feature Highlights of History with the sights, sounds and smells of the frontier fort. Daily tours and once-a-month evening tours are available June to September. The first weekend in June features a Good Ol’ Days celebration with a Chautauqua including re-enactors of Abraham Lincoln, John Brown and locals from the time period explaining why the fort was so important to our state and nation’s history. Admission to the site will be free that weekend. The site will wrap up their sesquicentennial Civil War commemoration with candlelight tours in December.