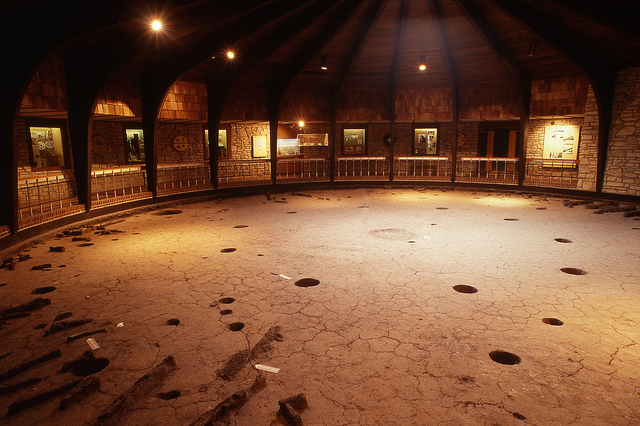 The Pawnee Indian Museum is a bit of a happy mistake. It is the oldest State Historic Site, deeded to the state in 1901.  The land was once the location of a permanent Pawnee Indian Village, providing a unique opportunity to tell the story of one of the indigenous tribes of Kansas.BUT the reason this land was saved, was NOT because people at the time valued this opportunity, but rather because they were a little bit confused. Site Administrator Richard Gould explains this misunderstanding of history and the unique destination that grew out of it:

What was the mistake?
This land was donated to the state in 1901, not because it was once home to over 2000 Pawnee Indians, but because it was believed Zebulon Pike had been here.

The story was that he came to the village in 1806, and noticed a Spanish flag flying. Pike convinced the Pawnee to fly the American flag. They did. “In lore, it was the first time the American flag flew west of the Missouri River,” explains Gould. This story was so widely believed, that thousands of people came to the dedication of the site and a monument commemorating Pike’s visit when it was opened in 1901. (You can still see this nice monument when you visit).

The problem? There was a Pawnee Indian village here, but Pike had never visited it. He was at another Pawnee village farther north in Nebraska. Oops. Without the incorrect story though, it’s believed the area would have been completely turned into a cornfield instead of the valuable archeological site it is today. So, sometimes historical mistakes are good things.

What makes the site unique today?
For those who make the journey to this remote museum (the highway leading to the museum literally dead-ends in its parking lot), the treat is a unique archeological experience.The main building of the site is actually built over the remains of a Pawnee earth lodge. They built the building. Then they did the excavation. The cool thing here is that you get to see unearthed items right where the Pawnee left them. “It’s the only museum in Kansas and Nebraska that’s telling the story of one of our indigenous people, and located where they wanted to live,” says Gould. Usually, archeological artifacts are uncovered in one location and transported somewhere else for display.

While Pike was never here, this village was once the location of about 50 earth lodges. The village was where the Pawnee came in the spring and fall for planting and harvest seasons. About half of the village was destroyed by modern farming before the rest of the land was deeded to the state in 1901. At the site, you can still see the depressions in the ground where other lodges once stood.

What special exhibits or events are coming up?
Even if you have visited this historic site before, there are always new reasons to visit. The site has new temporary exhibits on a quarterly basis.