A Century old Sentry: The Cathedral of the Plains 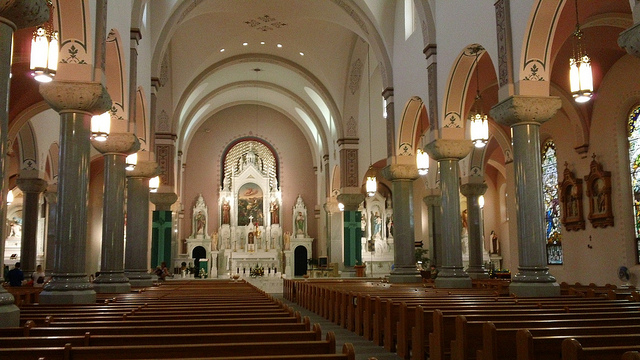 When Victoria’s St. Fidelis Catholic Church was completed in 1911, it was the largest church west of the Mississippi River. Its twin towers, rising 141-feet in the air, can be seen for miles. They have stood for a century as a testament to the people whose hard work built a place of worship worthy of the nickname “Cathedral of the Plains.[[endteaser]]

”The church is 220-feet long and 110-feet wide at the transepts with a large sanctuary which can seat 1100 people. Congregants built it so large in order to accommodate a boom of Catholic parishioners who swelled the area’s population in the late 1800s. Volga-German immigrants settled the area in the 1870’s and found Kansas farm land perfect for planting the wheat they carried with them from Russia. They wrote home, encouraging family and friends to join them on the plains. The area grew so quickly that the parish in Victoria had to serve Catholics from several surrounding communities.

Like many of the great cathedrals of Europe, the work of this church was born on the backs of the people who worshiped there. Each family was assessed six wagon loads of stone and $45.00 for each family member twelve years of age and older. The stone was cut by hand and hauled from the south bank of the Big Creek stream about seven miles from the church site. Since many families were quite large, records show some were responsible for as many as 70 to 80 wagon loads of stone.

The Cathedral of the Plains has never been a Cathedral in the strictest sense because no bishop resides there. It received the nick-name after a visit from William Jennings Bryan, who traveled there a year after it was built to visit nearby friends. The great orator and political powerhouse of his time was amazed by the church and quoted in local newspapers as calling it the “Cathedral of the Plains.

”The name stuck, and the love of this great church has grown state-wide. The Kansas Historical Society has designated the church as one of the religious treasures of the state. In 1971, it was placed on the National Register of Historic Places, and in 2008 the Kansas Sampler Foundation named it one of the “8 Wonders of Kansas.” The church still has an active congregation with regular Masses.

The church is open daily. A self-guided audio tour starts at the back of the church and has four stations on the center aisle describing the history and construction of the building. Parishioners also offer guided tours which can be arranged by contacting the parish office in advance of your visit at 785-735-2777.